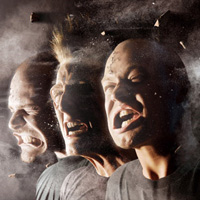 Noisia
"Split The Atom"
Bio
NOISIA (who took their name from the word â€˜VISIONâ€™ inverted on an upside down VHS tape) are Nik Roos, Thijs de Vlieger and Martijn van Sonderen, hailing from the Netherlands. Influenced by an eclectic range of artists, from The Prodigy to James Brown, Miles Davis to Konflict, Noisia make music for DJs and dance-floors that is interesting enough to cross over from the clubs to your MP3 player.

2005 saw Noisia establish their own label, Vision Recordings to put out their drum&bass productions and collaborations and retain creative control of their music. Nik designs almost all of the artwork for the releases on their labels, and the guys love the challenges and rewards that come with running a label. Vision Recording?s biggest releases to date have been â€˜The Tideâ€™, â€˜Exodusâ€™ Feat. KRS One and â€˜Stigmaâ€™. In 2007 they established Division, a non-D&B label for electro, breaks and house.

The guys have worked with, and remixed a number of artists, with notable tracks including, â€˜Aliceâ€™ by Moby, â€˜Omenâ€™ by The Prodigy and more recently, Foreign Beggars, Amon Tobin with whom they have collaborated on their forthcoming debut album and Hadouken whose entire new record â€˜For The Massesâ€™ they produced.

Their DJ schedule is tiring even to look at, they have played in major cities all over the world, from Sydney to Moscow, Tokyo to Berlin and have DJâ€™d in some of the worldâ€™s biggest clubs. Their track â€˜Groundhogâ€™ is featured twice on DJ Hero, a game which has been an international success, â€˜Stigmaâ€™ was used on the game Gran Turismo and â€˜Machine Gunâ€™, the first single off the new album, features in the game WipeOut.

2010 is an exciting year for Noisia, they start a new imprint called Invisible which will cater for deeper and more experimental drum&bass releases, produced by themselves and other artists and sees the release of their debut album â€˜Split The Atomâ€™ which features a wide variety of styles and genres from electro to drum&bass. 2010 will also be the year Noisia explore the LIVE direction of their music, challenge themselves and push their musical style whilst continuing to make the ?bangers? they are known and loved for!
Source: www.noisia.nl