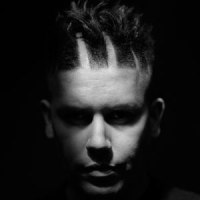 Paradox
"Dark Drum and Bass artist"
Bio
Paradox is the pseudonym of Dev Pandya, a producer from the UK who has in recent years championed a new sub-genre of drum & bass known as drumfunk,[1] which focuses on either finding obscure breakbeats or re-sampling much used drum & bass breakbeats from their original source and transforming them into constantly shifting drum patterns, noticeably different from traditional drum & bass.

He also records as a duo with producer Nucleus. He also has regularly collaborated with artist Seba.

He also records under the pseudonym Alaska. From 1994 to 1996 Pandya went by the alias Brown in collaboration with Rhymeside (Scott Williams), DJ Trax (David Davies) and Dangerman, which is another alias from Davies. Under the artist name of DMR Pandya released tracks as Paradox & DMR on the label Certificate 18 in the year 1998.

Pandya runs four record labels: Paradox Music, Esoteric, Outsider, and Arctic Music. He also ran the labels Mob Handed, Stronghold Records and Offset Recordings together with Davies from 1994 - 1997. Those labels are inactive, which means that there are no more records released on them.

Paradox released his first full length album 'Musician As Outsider' in the year 2000 on Reinforced Records as single artist. Both the CD and LP releases have ten tracks on them, but the CD version had a bonus CD with live PA-footage from paradox's 2000 tour. There was a special Japan version of the CD, released by Sony Japan, which featured changed patterns, different run times and the bonus-track 'The Unspoken Divide'.

In 2002 the second Paradox album, again on Reinforced Records came out, called 'What You Don't Know'. The LP version features ten tracks and the double CD release has 12 tracks on CD 1 and video footage from the 2002 live tour on CDVD (CD 2).

Again two years later in 2004 the album 'The Esoteric Funk' by Nucleus & Paradox was released on Reinforced Records. Nucleus' real name is Dave Sims. Sims and Pandya have released a CD album before in 1997 which is called 'Noise & Paradox - Transmograpfication'. At that time Simms went by the name 'Noise'.

Paradox released the first CD 'Seba & Paradox - Beats Me' on his label Paradox Music in 2006 featuring tracks from Seba, Paradox and Seba & Paradox collaborations. In 2007 paradox released the first CD on his label 'Outsider' called 'Paradox Presents: The Age Of Outsiders' featuring selected tracks from all releases on Outsider. CD 1 is mixed by Nucleus and CD 2 is mixed by DJ Trax.

July 2006 saw the 100th release of Paradox. On this occasion the 12" release was a special red vinyl featuring remixes of the Paradox-tracks 'The Unspoken Divide' and 'Give The Drummer Some'.

In collaboration with Bill Laswell and Herbie Hancock Paradox is featured on the album "Method Of Defiance - Inamorata" on the label Ohm Resistance with two tracks. While the track 'Panepha' has Paradox programmed the drums, Hancock plays the keyboard and Laswell the bass. The track 'Humanoid' has Paradox, again drum programmer, Toshinori Kondo on the trumpet, Bernie Worrell (Parliament Funkadelic) on the keyboards and Laswell as usual on the bass. The album was released in 2007.