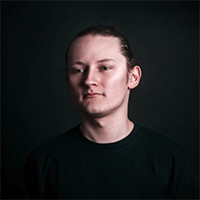 His debut release for the label was 2014's 'Abandon EP' - 5 tracks of explosive, high octane tech D&B that perfecttly summed up his sound and the no-holds-barred release policy of Blackout. He followed this up with 2015's hugely popular 'New Order' EP that continued where 'Abandon' left off and marked him out as one of the most exciting talents in tech/neuro D&B, further reinforced by his 2 nominations at the 2015 D&B awards.

Pythius' music has caught the attention of industry heavyweights such as Ed Rush & Optical, Audio, Current Value and more and he's now rubbing shoulders with global talents & label mates Black Sun Empire, State Of Mind & Neonlight, playing gigs across Europe from sell out Blackout shows to large scale festivals such as Let It Roll, Sziget and more. With a 3rd EP in the works and plenty more planned, the future is history in the making for this young artist.