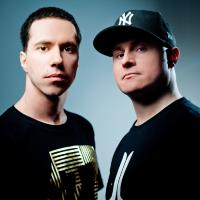 Calyx and TeeBee
"Dark Drum and Bass artist"
Bio
To drum & bass fans the world over the names Calyx and TeeBee are synonymous with high quality, perfectly sculpted music. Just as Michelangelo discovered statues in blocks of stone, so Calyx and TeeBee discovered the essence of D&B locked away in studio equipment; always forward-thinking and packed with as much integrity as energy; their music has had an impact on the scene for over fifteen years.

While Calyx & TeeBee?s first collaborations emerged in 2004, their history and friendship dates back to 1998 when they were introduced as label-mates of the legendary Moving Shadow imprint. In the following years the two artists accumulated astounding solo back-catalogues of releases on a glittering array of D&B?s most respected labels.

When Calyx and TeeBee finally decided it was time to work together in the studio, the first tracks they produced (?Follow The Leader? and ?Cyclone?) were highly acclaimed by the music press. Both tracks featured on Calyx?s debut album ?No Turning Back? and were picked up by Rockstar who used them as the soundtrack for a global TV campaign advertising the colossal ?Midnight Club? computer games series.

Following this huge joint success Calyx and TeeBee produced one of the landmark releases of 2006: ?The Quest? released on TeeBee?s renowned Subtitles label. In the same year the pair also penned ?The Shape Of Things To Come? for Renegade Hardware?s 10 year anniversary album before deciding to embark on the long journey of producing a collaborative album.

Now officially a duet, Calyx & TeeBee launched Momentum Music which marked its first release with their debut long player. The ?Anatomy? LP proved to be one of the most highly anticipated albums in D&B for years, gaining massive support from the scene?s big players and topping sales charts for months.

?Anatomy? set a whole new agenda. Following its release, Calyx & TeeBee decided to embark on non-stop tours across the globe, venturing into their now legendary and consistently in-demand joint DJ sets sporting 6 decks and 2 mixers with both players in action simultaneously.

The impact of their unique performances fed back into the studio, evolving their sonic signature once again in 2012. After signing exclusively with the mighty Ram Records, they delivered their long-awaited sophomore album ?All Or Nothing?: a kaleidoscopic array of music that sideswiped the scene with its jaw-dropping showcase of creations and collaborations. Five years in the making, this game-changer repped Calyx & TeeBee?s extensive range and abilities at a whole new level. The ensuing barrage of radio play and press exposure took the duo?s profile to unprecedented levels; with countless requests for high-profile remixes and a never-ending schedule of festival appearances, both their following and overall reputation reached an audience that transcended the genre.

The pair ended an amazing year with an avalanche of wins at the most respected awards ceremony in drum & bass: The Drum&BassArenaAwards. Home to the most dedicated and discerning fans on the planet, the brand?s community voted its leading single ?Elevate This Sound? (the first track that Calyx ever recorded his own vocals on) for Best Single and the second single ?Pure Gold? won Best Video. The duo were also recognised with the most coveted trophy possible: Best Producers. Adding to this gold-rush momentum, the duo were also shortlisted in BBC Radio1?s Top 5 best Essential Mixes of 2012 - a moment of scene history, it?s the first time a drum & bass artist?s Essential Mix has ever achieved such recognition.

As ?All Or Nothing? continues to develop a life of its own, having spawned massive singles such as ?Strung Out?, ?Elevate This Sound?, ?Pure Gold? and ?Scavenger?; the duo can be found either deep in the studio working on their next releases or at the world?s most respected drum & bass events, massaging the masses with their intricate six-deck sermons. More forward-thinking and packed with as much integrity and energy as ever, their music continues to have a peerless impact on drum & bass? and beyond!
Source: facebook.com/CalyxTeeBee