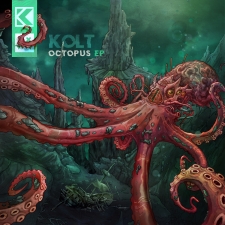 Deep beneath the brooding waves in the Northern-most waters of the globe, the wreck listed heavily in the grip of the weighty current; guiding it's infernal, slow descent with its cold touch. The void below awaited, the edge of the abyss mere meters ahead. A shimmering and terrible form emerged from the dark turquoise periphery, vast and cruel-looking, its tentacles unfurled against the decaying frame of the ship. Tens of suckers reached out with their voluptuous rings, gently brushing against the surface, seeking a way in. It could sense the death here, the swollen corpses within proffering the rich scent of succulent flesh - particles of those who once lived slipping between the planks and out into the ocean. It hungered... the heavy need to consume, driving it forward more quickly as it wrapped itself around the sailors' tomb.

A tentacle slipped through a porthole in the gloom, its faceteeth gnashing in anticipation, chattering cruelly and nervously. It slipped inside the black interior, appendages reaching in all directions for the meat it craved. It found the first of the floating corpses in moments, curling itself around and lowering its beak upon the fragile skull, crushing it easily and inhaling the bloody water deeply. The OCTOPUS shuddered with pleasure as it reveled in its putrid meal, fading deeper within the darkness to hunt its next morsel.

The ever-evolving EATBRAIN imprint welcomes an exceptional and exciting fresh producer back to the fold, with the Dutch-born KOLT bringing his debut EP - OCTOPUS - into the appendages of the label. Following up his well-received initial track 'Perforate' on the 'Divergence' compilation, which also features on the EP, Eatbrain returns for more of this young creator's fresh and exciting sound. Featuring 4 tracks of pure energetic mayhem, with an exceptional and pointed sound design ethic that straddles multiple sub-genres of drum and bass, the OCTOPUS EP delivers a unique and highly kinetic outlay with razor sharp edges. With such a significant first step as this, it's almost certain that we're likely to be hearing more from KOLT on EATBRAIN in the future.