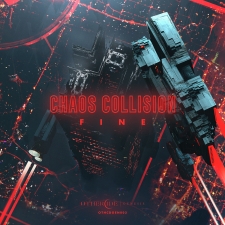 CHAOS COLLISION makes a riotous debut to drum & bass on OTHERCIDE RECORDINGS with “FINE / POWER PLANT”. Best known as Wavolizer, CHAOS COLLISION has been delivering exhilarating hardcore beats for 12 years, culminating with the release of his recent album “A Matter of Perspective” on The Third Movement. With “FINE / POWER PLANT”, CHAOS COLLISION has crafted two driving and powerful tracks that incorporate his hardcore influences to great effect as he continues to expand his ever growing musical boundaries.

A terse, dismissive vocal introduces FINE as it moves forward, unhindered by past pretenses before charging forwards with a furious blast of percussive force. Thunderous bombardments of kickdrums and snares hail down alongside a trenchant bassline as it surges through the track with devastating authority, in rebuke of any who might question the mandate of this new name. POWER PLANT hums with electrified pads from its outset as a chain reaction of drums leads to a moment of supercritical reaction, from which springs forth a turbulent vortex of sonic energy. As it arcs with basses that course with unrestrained power, the track is perforated by percussion that bursts forth from subatomic collisions within the reactor, whilst a haunting melody radiates from its core as a lasting reminder of the fury of the initial explosion.

With FINE / POWER PLANT, CHAOS COLLISION launches fervently into new sonic realms, delivering a energetic pair of tracks via OTHERCIDE RECORDINGS that are sure to extend his pioneering reputation to the Drum & Bass world, as he continues to blend his variety of styles to highly potent effect.