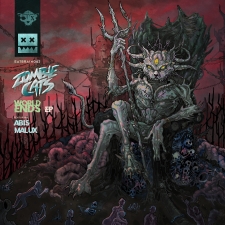 The mass of supplicants prostrated just beyond its twisted paws, their pathetic mewling pleasantly caressing the towering feline fiend's ears as they expressed their divine agony. Drinking up the delicious earmilk of their pain, it reclined languidly in its glorious pedestal; a mass of flesh and sinews with the fine carved bones from the countless many condemned to this realm of eternal torment. Its three eyes rolled apathetically to fall upon one particular beggar, drained of almost all remaining life from her years pennance, spent at the foot of the infernal throne, worshipping the glory of pain in all its truth and crying for salvation. The utter futility of this endeavor suddenly dawned on the great cat, as the constancy of myriad calls made for escape fell upon his ears at once. Suddenly annoyed by this ever-present sound, he reached out, spearing the pathetic being before him with a claw and flinging her from into rock and into the depths of the molten river below.

His eyes watched her form ignite and fade in the heat, her soul joining others to be swept into its current on a journey to be reborn as pitiful lesser devils elsewhere in the plane. How benevolent an act, the cat thought to itself, freeing the pitiful creature from her suffering for a brief moment and more even - giving her the opportunity of such an esteemed metamorphosis. Even though the pathetic fiend she would be reborn as would hold not even a candle to his own magnificence, it would still be a marked improvement against the limits of her prior flesh. Sated by his own thoughts, he leaned forward once, rotating his vast ears to better drink in the fresh desperate energy of the remaining supplicants. Its hideous mouth opened to a wide, sharp smile, revealing cruelly serrated fangs that shone unnaturally with a umbral hue. "A reward for my benevolence," he thought as he plucked the nearest wretch from the rock with a single talon, his pupils sharpening with focussed malevolence as he tossed them into his fur-lined maw. Satisfied, his hunger temporarily sated, there was but one thing left to do. He would take a nap.

The ZOMBIE CATS return to the label that set the fire on their ferocious project back in 2014, placing them on a fierce trajectory of furiously kinetic releases that have brought them to the present, their most pointed assault on the eardrums yet with the WORLD'S END EP on EATBRAIN. With the title track tearing out of the mouth of hell with slower bpm but highly charged energy, further establishing the newly forming neurowave genre, the cats make a bold statement from the outset. Also featuring 2 intense collaborations with masters of their art ABIS and MALUX, alongside 3 further astounding intensely fresh solo cuts, the WORLD'S END EP is a welcome return for one of tech dnb's most respected duo's, on one of the genres most consistent labels. The end is here, and it's one hell of a ride.