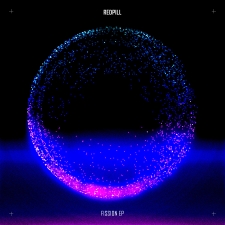 REDPILL continues his impressive streak of releases, following up his fierce ‘Harzardous / Get On It’ single with a fearsome step forward - the FISSION EP - on BLACKOUT. Featuring 6 tracks that surge with thermonuclear power as he deftly catalyzes the reactions that drive him into a charged audio slice. With recent releases on a slew of labels including Invisible, Eatbrain, Bad Taste Recordings & C4C Recordings, as well as his aforementioned Blackout single, this new EP represents a deeper cut into one of the leading entities in tech-driven drum and bass.

HOLD IT LIKE THAT tenuously structures an ominous harmony at its outset, quickly swept away by the massive impact of kickdrums and swarming synths that build into the track’s main section with its hammering bassline ceaselessly pulverizing the sonic space alongside sharp percussion and undulating highs. JEALOUSY echoes with metallic percussion and a cosmic arpeggio which slowly makes way to an eponymous word as the track’s gritty bass quakes with dark intent, evoking a sinister mood that only deepens as it skulks into halftime during its second drop.

FISSION glistens with the chimes of a music box entangled in a lullaby of threatening meter and rhyme that parodies the tranquil undercurrent, warping them into chaotic nightmare as a flurry of percussive hits hail down amongst a barrage of constantly morphing basses wrapt with electrified energy. Summoned from dark depths, GHOST IN THE CLUB simmers with spectral synths and a staccato topline that ceaselessly skitters across the tumultuous soundscape of convulsing basses and resounding percussion, carrying with it the malevolent resolve of a wronged revenant.

The aqueous atmosphere of RUB A SUB generates a slick and slippery bass upon which no other element holds sway, its power unrestrained by the traditional bounds of the percussion which seeks in vain to control it as it jumps about freely at the track’s center. SHOW ME WHAT YOU GOT closes the EP in cinematic style, its synths and impacts reverberating endlessly into the sonic expanse before being crushed before the might of a single unrelenting bass, one that responds in answer to the track’s title by displaying its brutish strength in a final and audacious show of force.

With his FISSION EP, one of today’s most exciting young producers, REDPILL, explores a multitude of differing angles whilst maintaining his characteristic style, showcasing both his expert production talent and versatility with masterful prowess. Transmitted through the BLACKOUT with the label’s consistently high quality threshold, his infectious sound is sure to continue to spread at breakneck pace, leaving considerable fallout in its wake from its explosive nature.