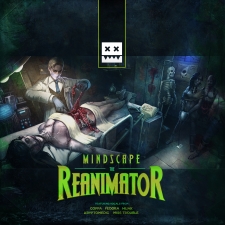 One of tech-injected dnb’s greatest hero’s – MINDSCAPE – unleashes the limitless power of his fourth full-length studio album – THE REANIMATOR LP – on the by now ravenous and vast pack of the EATBRAIN audience. Having vigorously prepared for them for the full onslaught of his album with a series of advance EPs that effectively unveiled the scope of imagination from one of neurofunk’s seminal producers, ravers and listeners are strung in high anticipation for the dark aural pleasures set to unfurl. Featuring a blinding array of some of the best vocal talent in the drum and bass genre, with COPPA, FEDORA, HIJAK, KRYPTOMEDIC and MISS TROUBLE on the mic, this is jacked-up tech with a killer party vibe, raised from the kind of horrifyingly good carnage that one can only find on the Eatbrain dancefloor.